Design a site like this with WordPress.com
Get started
Skip to content
infohondurasagapeus Uncategorized June 15, 2009March 13, 2019 4 Minutes 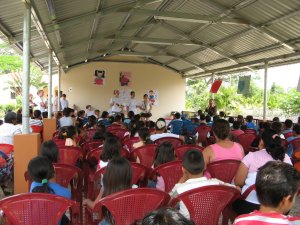 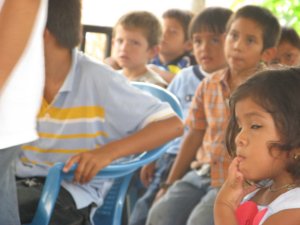 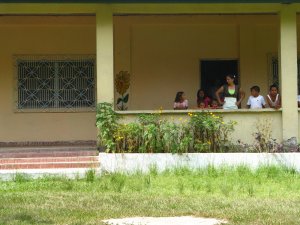 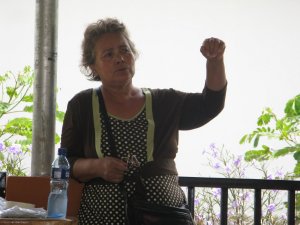 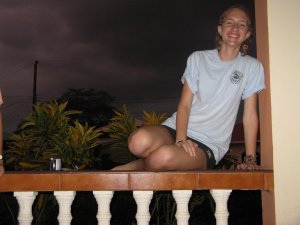 Today was to be a somewhat relaxing day, in that there was no difficult toilsome labor to be done. Our schedule included a “late” breakfast at 8 AM, several hours of preparation, and then I would have my debut as a helper in a vacation bible school session for some kids in the community. When I woke up, I couldn’t remember what we had going on late in the afternoon, but I told myself I would find out at breakfast. (It turned out we were going to visit the Sunday bible classes of the Agape Promise kids, and then they would come back to Señora Martha’s place for dinner and a skit we would put on). Everyone loves seeing the kids in our group. I’ve never been a big fan of praise songs ever since my mother would play the VBS tapes on repeat on long car rides when I was a kid, and I was probably not the most enthusiastic singer. What I lacked in energy, however, Arden and Mrs. Eberhard, specifically (along with many of the others), made up for with their energized dancing and perfection of those catchy little kids’ songs. I think the kids enjoyed the service, which included several spirited vocal solos from the kids in the community (they were just invited to come to the front and sing Christian songs that they knew). Afterwards, we broke off into three separate groups, a coloring group, a game group, and a crafts group. I don’t know exactly what went on at the other two groups, however, where I was stationed, the kids made bracelets with colored beads to remind them of the various elements of salvation (that is, a yellow bead signifying heaven, where we go when we are saved, black beads symbolizing sin which separates us from God, red beads symbolizing the blood of Christ which is our saving grace, white beads emphasizing the cleansing act of Jesus’ sacrifice, and green beads symbolizing one’s spiritual growth which comes from reading and sharing the truths of the bible). The kids seemed to enjoy it all, and I saw quite a few of the kids later on in the day with their bracelets still on. I’m sure they will be all the rage in the city of Quimistan, and all the kids who missed out will be begging their friends to let them borrow their bracelets for their next stylish evening on the town. And hopefully they will use them as a tool to spread the message we tried to instill in them throughout the community. After we ate our lunch and lay around for a bit, we prepared for a skit we were to do later in the evening. After a bit, we went and visited the Agape Promise kids at their bible class, which was located at a kindergarten that was not in use on a Sunday afternoon, and they returned to Sra. Martha’s Kitchen where we played around with some bouncy balls and Frisbees before putting on a skit, witnessing a song and a skit of the kids’ own, and serving them dinner. After dinner, our day is usually pretty much over besides the occasional spirited game of Uno or volleyball, but what happened after today is what compelled me to write today’s blog. In fact, I am quite positive that what happened just minutes after the kids left the compound will be one of my most vivid memories for the rest of my life.

We were hanging out with the kids outside the compound, not wanting them to leave, as they began to pile into the backs of trucks and vans, as a storm began to whip up in the distance. “Hay luz en el pueblo” (there’s light in the village), I heard one of the ladies say before we sent them off, thankfully getting them away before the impending tempest. That storm never reached a very climactic level besides some loud thunder and some bright lightning bolts coming from a few miles away. As we headed in from the storm once most of the kids had left, we began to collect our food onto plates and sit down, talking amongst ourselves, when we heard a huge crashing sound. At first I thought that it was a nearby lightning bolt and thought myself lucky to be inside, however, I heard horrified cries from my friends, that there had been a car accident just outside the window, that someone had crashed into the ditch next to the wall of the compound, and we all ran outside to see what we could do to help. There were three people in the car, two men and a boy. The boy and one of the men escaped unscathed, but the third man, named John, was not nearly so lucky. His jeep had apparently flipped three times before facing backwards upside down in the ditch on the opposite side of the road from where he’d been driving. I can describe what happened next as no less than a miracle, as some of the people around helped pull the man from under the car, we scrambled for first aid supplies and a telephone, and our translator hurried back into town to talk the mayor into sending an ambulance out as quickly as possible. Nonetheless, the ambulance took over 30 minutes to get there, even though the red cross was only a mile away from the compound, and on the same road. Mrs. Turnipseed, Arden, and others quite miraculously performed the necessary first aid to keep the man in decently good shape until the ambulance arrived. I honestly believe that if he had wrecked 500 meters away from the compound in any direction, this man’s fate may have taken a turn for the worse. As it is, however, he eventually was carried off in the ambulance, and we were left with an intangible but important reminder of how dangerous this place (and roads in general) can be. We thank God that the kids had been taken away from the compound by the approaching storm, and hope that you’ll continue to hold us in your prayers. I personally realize now how much we really need them, and continue to pray for this man’s own well-being. We are all fine, however, and prepared to face the challenges the next day has for us.

One thought on “El quinto día”