Since we finished the bookcase/tables project yesterday, we took on another job today. We refinished the entry door of the HAF office and scraped/cleaned the front window. We decided to also refinish the front door of the 90-year-old lady who owns the HAF office building. She is no longer ambulatory since she broke her leg a couple of years ago, which resulted in gangrene. She lives next door with her barely functional son. She had allowed us to use her fenced back yard yesterday to paint the bookcases and desks.

We all worked to sand the doors and paint them with varnish stain before lunch. Bruce, Tom, and Jim re-installed the doors and applied a second coat of paint late afternoon. Maynor, the lady, and her son were very happy, which made us happy too. 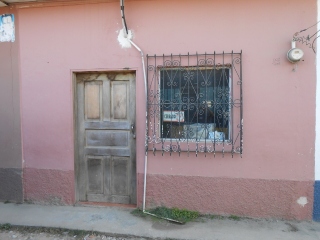 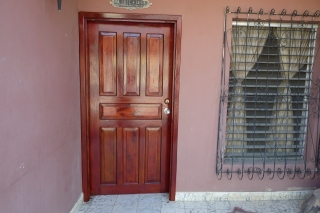 This afternoon Lorraine and Allen traveled to a nearby village close to the San Francisco bridge to see a moringa grove. Moringa trees are being promoted in under-developed areas because all parts of the plant can be eaten. They met the property keeper of the land. It turned out that the trees growing there were not moringas, but were gandul trees, which produce  protein-rich beans. They also learned about mazapan trees (also known as breadfruit) that produce a fruit which can be fried to taste like potatoes. The property keeper talked to the landowner, who is an international businessman, and learned that he planned to plant some moringa trees in that area soon. The owner’s opinion was that the combination of moringa trees, gandul beans, and mazapan fruit would provide important proteins, minerals, and vitamins. These plants could provide some of the remote villages additional ways to grow more of their own foods.

Good night and see you tomorrow!

One thought on “Wound Down – coming home tomorrow”