Design a site like this with WordPress.com
Get started
Skip to content
infohondurasagapeus Uncategorized April 11, 2013March 13, 2019 2 Minutes

Today after a breakfast tortillas and beans (oh no Jimi) we went for an arduous trip into the mountains!  What started out to be an hour long trip to the village of Tao turned into a two hour adventure.  We thought the little taxi cars in Copan were scary ….. thank God for four wheel drive.  We even drove through a river just like on the truck commercials!  Lucky for us the “bus” made it there safely and we are all still in one piece.  Driving so slowly, we attracted a lot of attention … or maybe it was because we were a bunch of foreigners crammed into a Toyota “bus”!

The school we visited today was “Escuela Del Carmen Pena”.  This is a public facility that educates 130 kids in three classrooms (and three teachers to match – talk about overcrowding)!  We are charged with helping to build a fourth classroom to ease this overcrowding.  The kids were all in class when we arrived but had lots of fun watching us work. We all pitched in with digging dirt, shoveling, brick laying, carrying rocks and supervision as well as experiencing the sights and sounds of the area to include local vegetation (lots of corn there;)  Most of us have not worked that hard in some time!

We had local fare prepared most certainly in an outdoor kitchen!  You just can’t buy that in Aiken.  Whole chicken was prepared for us (good thing they eventually cut it up as it is doubtful that many of us even know how to cut up a chicken … except maybe Jimi but he eats squirrel) in addition to soup and rice … and of course tortillas!

When school let out the kids were ready to play!  Thanks to Jeff and Michael we had lots of toys to entertain the kids.  The girls had an absolute ball playing with the jump ropes and the balls and Frisbees were a huge hit!  The squealing from the kids was evidence of their degree of excitement!  We are headed back their way tomorrow so we better take candy to step it up a bit.

Everyone barely had time to shower (never could get Leigh in there but it worked out as we made her sit on the porch) after we got back before it was time for dinner and a movie.  Several kids from the Agape Promises program joined us for the Spanish version of Shrek the Third and popcorn.  It is great to see all the Saint John’s Youth interacting with these special kids! 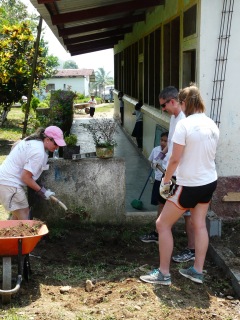 Roz and Abby dig some dirt …. actually mostly rocks … and we see who is working;)

Front of the school 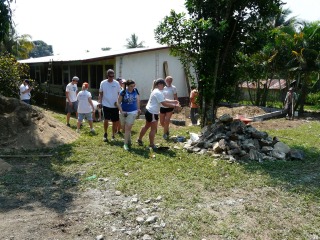 Abby get your swing on!

Yay! Beach ball is a blast!! 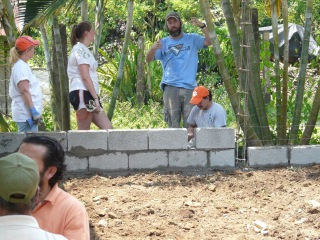 The fish was enormous … with huge teeth! 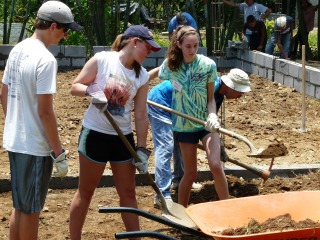 This is so much fun!  I hope we can find jobs doing this back home!

Ms. Reed where did you learn to spread mortar?

Our fearless leader demonstrating the finer points of robotics 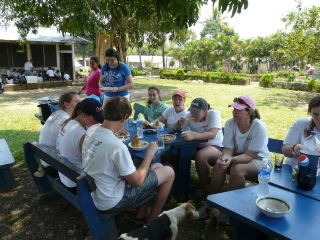 Side of school – three classrooms are in this building

Allie is being recruited by Clemson

Jump rope was a hit! Michael wanted to jump but we needed a rope turner.

Jeff loves him some beach balls!

Kids loved the camera (the other one).

And that girls, is how you turn a cart wheel.